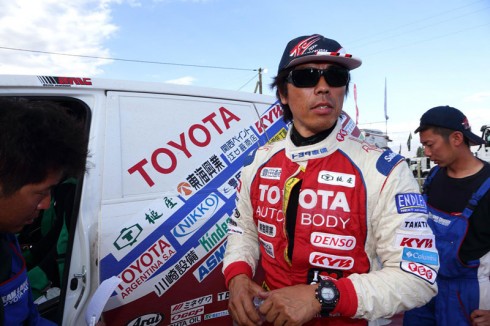 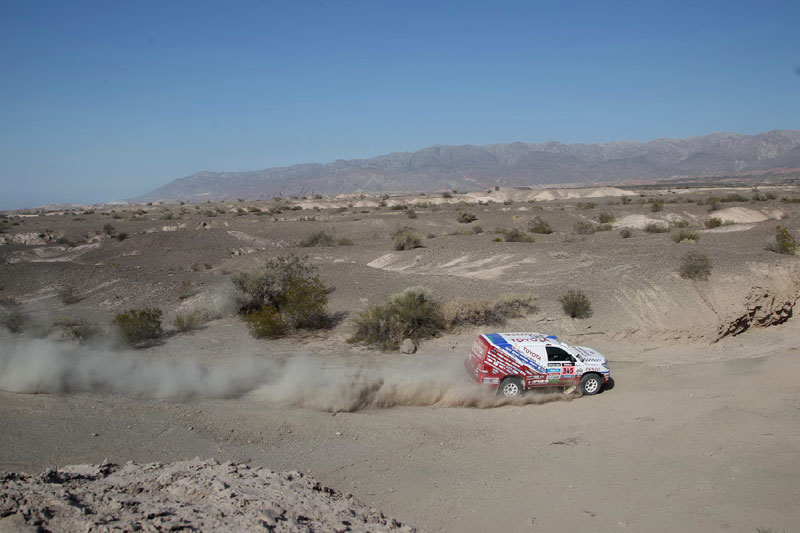 Finished at the top of the class in the longest SS.

January 08(Local date), today’s SS section was the longest distance at this rally and separated by 2 courses. At the last half of this course, highland’s altitude reached 3000m. Camions and other cars mixed at the same course today and the camions started earlier. Jun’s car’s engine did not start by electrical bug just 5minutes before the race but he could start barely on time.

Jun was bothered by the dust that distributed by camions though their pace was so fast. Jun passed 1 camion and 2 cars. He got the clear eyesight after that. The first half of the stage, Jun ‘s eyesight got clear and he was able to run with comfort. Because the road surface was similar to the road of Morocco where Jun doing the training every year. He moved through on the asphalt road 156km to the last half of the stage. Jun ran easily on same road surface at the beginning of the last half like the first half of this course.

Dried-up river and the computer bungle annoyed Jun a bit at the final phase. When Jun ran through the water part of the dried-up river, the alarm light was flashing but it was malfunction. Jun drove the car not to the computer makes the wrong alarm. Additionally the car lost the power like a small car and he could not up the pace rest of 50km. The sand too much heavy or the altitude is too high….. Jun checked the car to find the cause of the wrong alarm after he arrived the bivouac. Then he found the air duct that extended to the side pillar came off. This is the reason of the slump of today or any other reason still remains, not for sure yet….. Jun reported this story as soon as he arrived the bivouac place and the crew check the car to fix later .

Jun came here without big troubles and hope brace himself up from tomorrow.