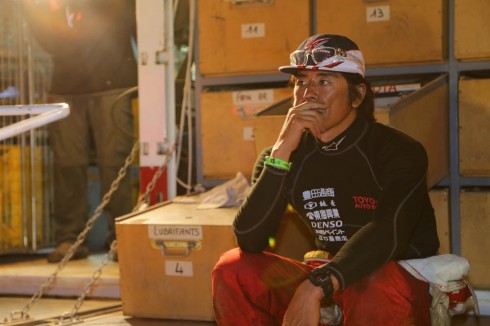 January 14(Local date), We had a report from the site and knew the situation of JUN’s car crushed. After JUN cleared the right corner, the car fallen ahead and got upside down in the second half of the second SS. The drop was not high and JUN and Alain was not injured.
However all of the engine oil leaked and they had no spare. They obtained the oil from other cars and started again but they lost much time. Even the power steering fluid was lost after that and the heavy steering made JUN’s arms so tired. He had to run in the dark with the one-eyed head light too. JUN reached the goal after 22:00.

When he woke up in the tent next morning, TLC decided to retire the rally already. JUN’s Dakar Rally 2013 was over in frustration.