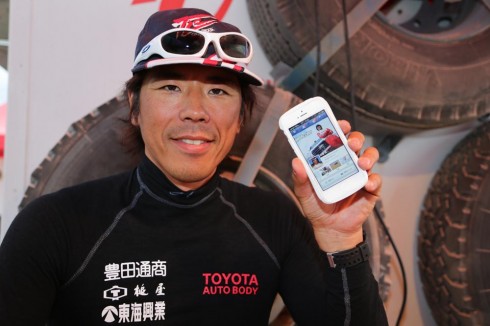 January 10(Local date), the stage 7 was the high altitude course in the Andean Cordilleras. JUN has been over and over the high mountains at the same altitude of Mt.Fuji(3,776 m) of Japan. He crossed the border and entered Argentina later. This stage was canceled by officials once but they held the stage according to schedule that was lucky for TLC. Because they don’t want to lose any stages for the victory. A lots of car crush happened everywhere today, the reason was the stage 7 had many mountain paths to cross the borderline in the high altitude Fortunately JUN was not caught in any accidents.

Hitting off today’s stage, it will be the battle with the dust. The camion went ahead like blocked JUN’s way and he had to follow the truck 70km long with full of stress. However Alain showed his great navigation skill during the low visibility by dust. JUN followed Alain’s instruction to drive the car. Like the eyeballs of JUN, the view came around as Alain said. JUN felt the combination with Alain was the perfect and great again. He worried about Alain’s motivation but he was so glad Alain’s reanimation.

The car had the bunch of electric troubles yesterday but not today. Mountain air was so thin and felt the engine gutless a bit also.

TLC team arrived the bivouac, it was heavy rain. Officials separated tomorrow’s SS into the 2 parts due to the rain, and the one of SS was canceled. It is the damage for TLC.

JUN thanked to the mechanics who kept to maintain the car in the rain. SS become short but JUN will strongly support the car #343 tomorrow.