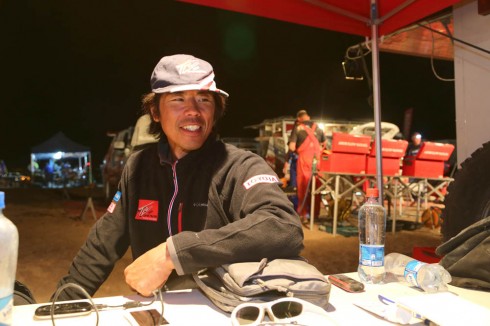 January 09(Local date), today was the day of troubles. 2 cars of TLC missed the course adoption same time and lost their way at the beginning of the race. They were interrupted by climbing the sand dunes that they dd not to need. The tire came off several times and finished up the tires they have only 3 also and the cars had to run at the low speed.

Unfortunately the electric trouble happened like yesterday again. At 30 to 40km point from the start, the engine did not rev up but nobody could not find the matter. Finally the engine stopped when SS was finished. JUN and the crew arrived to the bivouac by towing and lost much of time. It was lucky the engine did not stop during SS…..

Tomorrow’s weather cast is snow and the official canceled the race once but they recalled it. Race is on. To catch up the leaders, JUN and the team want to avoid to cut down the stage. They tried to recover the loss up to 20 minutes as they talked by all before the start. The car #343 of TLC had shorten 20 minutes gap between Foj, the top of the stock car category as they talked before the race.
JUN said “We relayed the hope to the win”.
He changed his mind completely from the sad news of yesterday. He was so fine and cheerful.