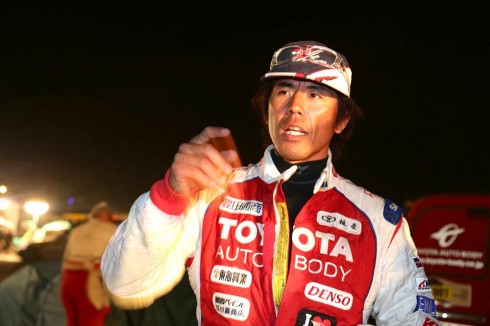 January 08(Local date), JUN finished the stage 4, it is the catastasis of the first half of Dakar Rally 2013. He arrived to the bivouac at 22:00(Local time) and the first thing JUN said was “I’m so tired !”. Today was the bad luck day for him.

JUN followed the teammate car with enough distance between cars, because when the antecessor change the direction suddenly, the follower will be faced the danger to crush with the car embedded in the sand. Unfortunately the car No.343 of the TLC team stuck in the sand and JUN helped to pull out the car for escaping and spend the time.

JUN started down the hill next but another team’s car fallen down the slope and blocked JUN’s way. He stood on the middle of the slope and there was no way to get out. JUN put the boards in front of the car to escape but it did not work. Get the fallen car out of the way was the only choice. Other cars arrived and helped to bail-out the fallen car from the slope later. At last JUN succeeded to get out. However it became the big time loss for him.

After that, JUN finished the stage 4 at a good rate but the sand broke into the clutch and he could not increase his pace as JUN wanted.

JUN spent a long time for the stage 4 but he was not in a lather and he believes there are lots of chances to catch up from tomorrow. Hope JUN rest up enough for the stage 5.